ATHENS, Ga. — The corner on the east side of the field, directly to the right of the Georgia soccer team’s touchline, was packed with dignitaries Saturday afternoon. The governor and first lady of Georgia hung out with the president and athletic director of the school, which was about to win again. Security stepped in for them, as did SEC Commissioner Greg Sankey, whose eyes were on his phone and streaming another game.

South Carolina came back to anger Clemson. Elsewhere, Michigan ran away from Ohio State. things happened. Team Sankey, meanwhile, was there in person to watch and just capped off another win, 37-14 over Georgia Tech. Another game that was far from perfect. Another game that has revealed potential flaws.

Another game that hasn’t caught up with Georgia.

“Sometimes we get hit in the mouth. But one thing about this team, we always hit back,” said center Sedrick Van Pran-Granger. “That’s definitely something I want to say. I’m confident and proud of how this team has responded. Definitely not last year in the sense of last year just blew people away. But I think it’s really nice to find different ways to win a game.”

Beauty is a way of looking at it. Another is to look back at the top of this year’s AP preseason poll:

Georgia, for all its volatility, is the last survivor.

Maybe. Ohio State could still return to the college football playoffs, depending on other results. And as wild as it once sounded, Alabama is still a threat because it’s Alabama and you know some members of the selection committee will genuinely believe Nick Saban’s team is one of the top four teams in the country.

But Georgia left no doubt. It ends up in the exact same position as last year at the end of the regular season: unbeaten, top-ranked team in the country, destined for the playoffs no matter what happens in the SEC championship. And this time it comes without chasing the ghost of history, without people wondering about a 41-year drought.

The result can be that the Bulldogs sometimes play like they can show up and win. Like in the first half of that game, when their vaunted defense gave up a 75-yard drive to open the game, the first touchdown they gave up in the first quarter all season. Then the offensive rumbled around a bit and once again struggled in the red zone. This part of the film has been played before.

So did the next part: Georgia restored order over a third quarter as the defense allowed a yard total — a single yard — and soon it went from 10-7 at halftime to 37-7 and the second teamers in the game.

“We just make it,” said quarterback Stetson Bennett. “I said I’m not really happy with how we started today. But we still scored 37 points, and they still only scored 14 points on that trick play (towards the end).

They could make it to lifting another trophy in Los Angeles. However, Bennett has been told that the narrative either plays out his team against some opponents or it’s a team that turns it on when it needs to, and either way it could catch up to them. He didn’t argue.

“If you look at our games, it’s kind of justified,” Bennett said. “The games for which it’s warranted will probably be talked about a little more than the ones that aren’t. But the goal is that that doesn’t happen. And from now on we can’t do it anymore, otherwise we’ll lose.” 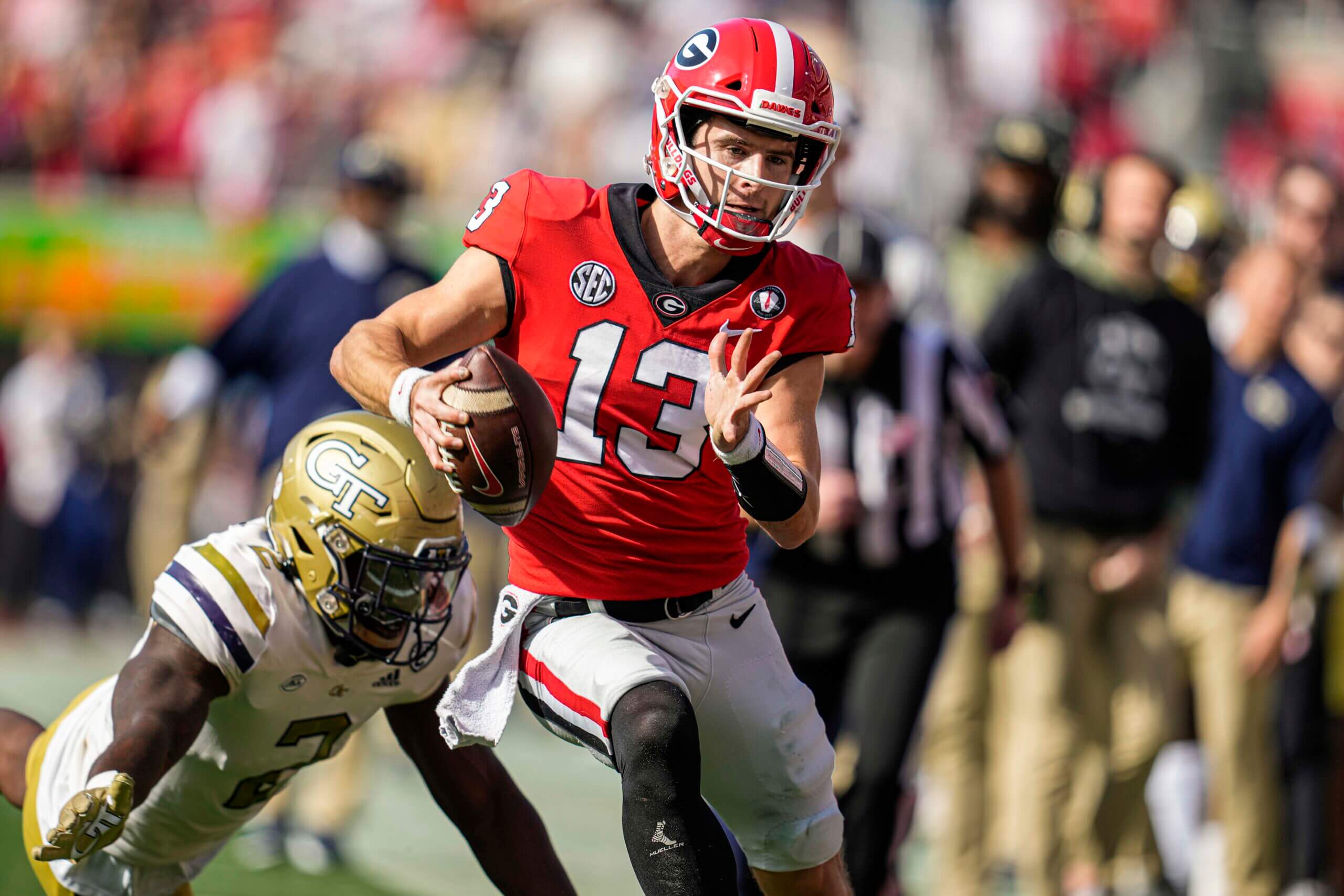 Georgia has had many times this season when it seemed to be looking around, waiting for someone to make a game. This has led to the impression that a team is constantly playing against the opponent and an upset is overdue. Still, this was only the third time Georgia has been left behind all season. (Most of the Missouri game and 3-0 against Tennessee in a game that quickly went the other way.)

This game, like others that have briefly been close, didn’t really feel in the danger zone. Georgia Tech beat Georgia in the first half (187-153). Kelee Ringo symbolized that game in some ways for Georgia: the cornerback got off to a rough start and gave up some big plays, including one where he was caught wrong-footed on a short screen and the receiver went 16 yards past him. But Ringo recovered and finished well, as did the defence.

The special teams saw some defining moments when Ladd McConkey uncorked a long punt return and also a ball on the 1st kicker Jack Podlesny, one of this year’s team’s underrated stars, saved the offense again with three field goals, including a 50-yarder.

And the offense did its part, Kenny McIntosh in particular.

This season began with McIntosh as receiver from the backfield in the Oregon loss. The regular season ends with McIntosh exploding as both a runner (86 yards on Saturday) and a receiver (91 yards, 78 of them on a bike stretch in the second half).

“Kenny is special with the ball in his hands,” said Bennett. “I saw the safety – he went defensive and the safety just went in a little too far – and I threw it over his head and he went on and got a horse collar. He’s a backfield weapon.”

This game was another plan for the Georgia offense, which had just 138 passing yards but got nearly double that (268) for speeding up the ball. Bennett contributed a couple of well-timed scramblings to the mileage.

Penalties were also a hindrance: Brock Bowers thought he had converted a fourth and two finals but was asked for a face mask while pushing the defender away. Warren McClendon was called for a personal foul, pushing the team backwards into Podlesnky’s eventual 50-yarder. But once things got going in the second half, things picked up quickly.

“There were a few penalties, a few decisions on my part that kind of slowed us down. That can’t happen,” Bennett said. “Overall, we start hitting them more when there’s more momentum.”

The way Georgia dominated teams last year and started dominating teams this year may have set a standard that was always impossible to match. This can be annoying for both the fans and the coaching staff; Kirby Smart admitted after the game that it was hard to pinpoint one thing that just got better and better as the season progressed.

“You can say, ‘Oh, they got so good at it,’ and next week it’s not there,” Smart said. “It’s a model of consistency and making sure you’re good at every area you can be good at. There is no area where we cannot improve. Let’s be honest, we have a lot of areas where we need to improve.”

As they prepare for another post-season run, the pre-game highlights served as a reminder that alongside many players who left this team, there are many more left: McIntosh and AD Mitchell who opted for that touchdown of the Halfback option against Michigan, Ringo and his international teamed championship heroes, Bennett of course and more.

The trick was getting to that point. The challenge for this Georgia team was to survive through December, with offense buying time for the fledgling defense to gel and gain experience. As it turns out, the defense has more than held its own, and the offense is entering the postseason, potentially adding one of their key players in Mitchell to appear in a game.

Smart ended the afternoon by honoring Vince Dooley, who wore one of the ties Dooley wore while practicing the game. Dooley’s son Derek and his wife Barbara said they would be honored if Smart wore it during the game – but Smart “slammed” because he didn’t want his outfit to be a distraction. So he wore it to the post-game press conference.

“This duel has a lot of wins under its belt, I know that. He’s won a lot of football games,” Smart said, then looked at Georgia’s longtime sports information director. “Claude (Felton) was probably here for every one of them.”

The room laughed. Felton shook his head and smiled. Smart, who has been stoic all season, had finally cracked a joke. A moment of hilarity at the program that finished at the top last year and is still there, the best imperfect team in the country.