To support student journalism and the content you love, become a member of The Daily Orange today.

Georgia Woolley scored 24 points in a Queensland State League game against Stephanie Reid. Reid had just finished college in Buffalo under Felisha Legette-Jack and knew the Bulls could use a player like Woolley. Reid called her former coach after the game and told her to recruit Woolley heavily.

Woolley knew she would be a perfect match for Buffalo after one call, said Sue, her mother. After Reid convinced Woolley of Legette-Jack’s coaching skills, the decision was made.

After a season at Buffalo, Woolley followed Legette-Jack to Syracuse. Legette-Jack and Woolley’s parents say the transfer guard has only played three games due to “nagging” injuries. But after a year at Buffalo under Legette-Jack and a lifetime of excelling in basketball in Australia, Woolley has proven she will play a key role for SU with her ball-handling skills and ability to create scoring chances .

When Woolley got to Buffalo, she was fine. In 34 games with the Bulls, she averaged 14.6 points per game on 41.8% shooting. She had outstanding performances, including a 29-point game against Ball State in the 2021 MAC Tournament Championship. Not even 10 games in her collegiate career, even with All-MAC talent like Dyaisha Fair on the list, Woolley was not credited end games.

Against VCU on December 8, 2021, Buffalo prepared Woolley for a shot in the dying seconds of a tied game. Woolley received an incoming pass from the left wing, rolled into the high post and scored with a hook shot on the buzzer, giving Buffalo their fifth straight win.

“Your IQ of the game is what you need on the pitch,” Legette-Jack said. “She knows how to play with four or three people, but she also knows how to be a star player when her time comes.”

Woolley learned to play with other teammates by training with Bronnie Marshall, a former Olympian and Australian professional basketball player. Woolley and her parents were told she had a chance to turn pro, so they found coaches to help her grow. Sue said this attention from the coaches stems from her remarkable skills. 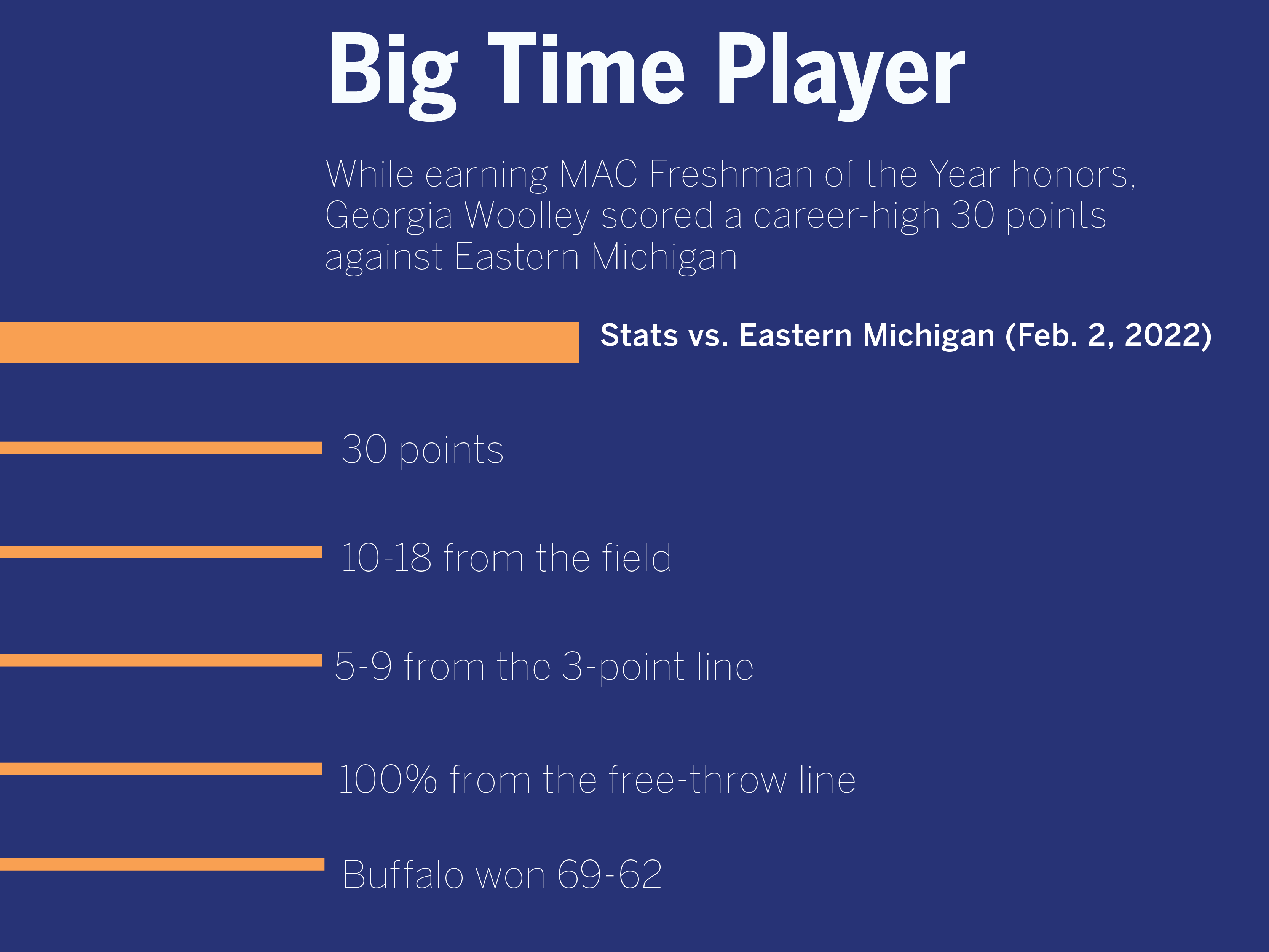 “She’s a very good driver and she can reach the basket,” said Sue.

Woolley’s father Adam said while many other players pigeonhole themselves as just being a good 3-point shooter or a good point guard who deals the ball, Woolley can do anything.

Marshall said Woolley, even as a small, lanky 11-year-old, was offensively better than the kids around her. She was very good at fast breaks and pretty good at drive.

Woolley and Marshall trained twice a week for six months before Woolley went into state or club training. Marshall also added a 3-point shot to Woolley’s arsenal, helping her get better defensively. She urged Woolley to take offense if someone hit her. A final growth spurt at 15 took her skills to another level, Marshall said.

“She could keep up all over the place,” Marshall said. “She could actually get rebounds and play against big players if necessary.”

Along with this revelation, Marshall watched Woolley dominate at the state championships in a bronze medal match. Woolley played for a Brisbane team that had just eight players due to injuries, Marshall said. Even with the short bench, Woolley scored 16 points to secure the win.

Stephen Wong, girls’ basketball coordinator at St. Paul’s School, a private high school in Bald Hills, Australia, was immediately impressed by Woolley’s ball handling as it was “well above her age group”. For Wong, Woolley always knew what she wanted when she was on the pitch and how to distribute the ball.

Against John Paul College, Woolley went coast to coast against the defenders, blowing past the players with every move of her repertoire. Sometimes she would dribble between her legs to get past defenders. Other times she shook them off with movements behind her back. 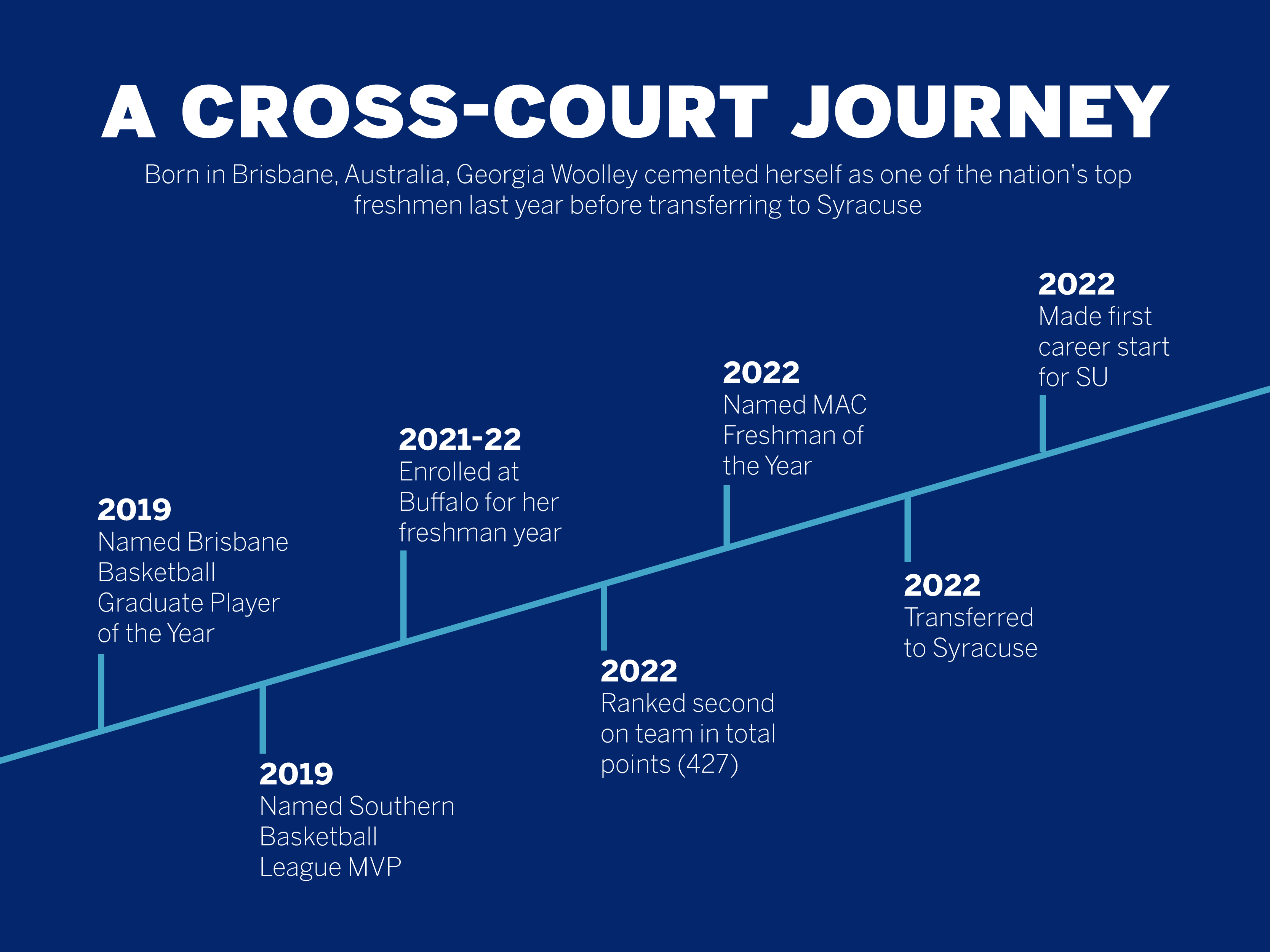 “She’s the best by far,” Wong said, comparing Woolley to other players at St Paul’s over the years. “She was absolutely outstanding here.”

With her move to Syracuse, Woolley began to implement the qualities she had learned from her time at Marshall and St. Paul’s. After missing three of the first five games of the season, Woolley made her first start against Bucknell where she had a 3-point win in the fourth quarter.

In the Orange’s season opener against Stony Brook, Woolley curled up near the baseline when she found an open spot in the right corner. She then threw up her hands, prompting an air pass from Fair.

Woolley said this piece was one the Oranges liked to perform. It’s her job to finish these recordings, which she did.

“It feels good,” Woolley said. “I just had confidence going into this game. Just not even thinking about the injury has helped me do what I do.”