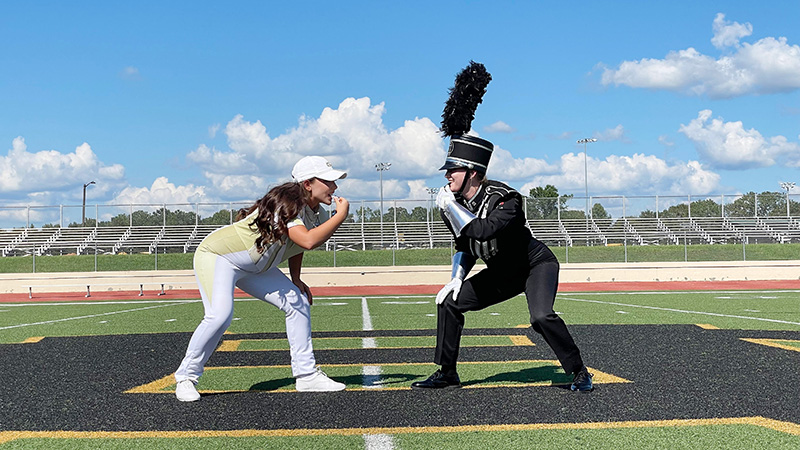 On Saturday, when the University of Georgia hosts Georgia Tech for a little clean, old-fashioned hate, two of Harris County’s best will take the field to not only perform with each institution’s famed marching bands, but lead each group to their highest positions of leadership .

Both women were members of the Harris County High School Marching Band and spent three years together in the classroom and on the field. The couple has performed together in large and small groups on numerous occasions. For the past two years, both have been members of their respective rival college marching bands, performing against each other on those special Saturdays in November. Each of their college bands has hundreds of members, but there are only four drum majors, chosen through competitive auditions. Drum majors serve in the highest leadership position for each group, leading their bands and tailgate communities in the traditions of game days, parades, making game calls during games, and performing performances.

Marston is the daughter of Tim and Ashley Marston of Fortson. Tim, originally from Diamond, Missouri, and his wife Ashley, originally from Charlotte, North Carolina, are both Clemson fans and are involved in the Harris County community through their volunteering in Little League and Ashley’s work with the Parks and Recreation Department district known.

Marston’s main instrument is the clarinet. Her high school band leader, Miranda Carlsen, said she remembered teaching Marston in eighth grade and tricking her a little when she auditioned for the high school internship.

“We use the 11th and 12th grade GMEA (Georgia Music Educators Association) state-wide scale charts as the basis for monitoring progress throughout the student’s high school career. We give it to them early so kids like Marston can master them early and track all of their progress toward their goal. What costs some students an academic year or two of work in the band class, particularly range development, Marston took – with their initiative, determination and skills – two days at home.”

Marston marched on the drumline in high school and tried out for the UGA and was included in the cymbal line. She said one of her favorite events is playing home game day at the Tate Student Center drum shows.

Kaleigh Griswell was part of the graduating class of 2020 that closed March 13 due to COVID-19. She served as the drum major of the Harris County High School Bands for three years, winning marching band at the end of her freshman year and after just one year performing on the color watch with a twirling flag and rifle. Griswell’s main instrument is the flute. She has also served the local community in the pageant world as Miss Harris County’s Outstanding Teen 2019 and Miss Harris County 2020 and 2021, with 2021 being an extension due to Covid.

Her high school principal said, “During her high school days as our Miss HCHS, she raised almost $4,000 for the HCHS bands and has recently started her own nonprofit organization that provides music education materials to parents of newborns in hospitals and NICU supplies departments with.” scientifically composed music that promotes the cognitive development of preterm infants.”