ESTERO, Fla. – Bianca Jackson scored 12 points in the fourth quarter and finished the day on 24 points to lead Georgia Tech to a 58-52 win over Belmont in the final game of Sunday’s Gulf Coast Showcase. Tech finished the tournament 2-1 and went up to 5-2 in the season.

It all came down to the last three minutes as Belmont came out of halftime and dominated the third quarter, winning the period 22-7 to take the lead and hold a 39-36 advantage in the fourth quarter. The Bruins led by five, 50-45 when the clock struck 3:05 before Tech finished the game with a 13-2 run. Jackson hit a clutch three-pointer at the 1:50 mark and Tech went 10-to-12 at the free-throw line the final stretch to seal the win.

A spread of his offense gave Georgia Tech a 29-17 halftime advantage despite shooting just 28.9 percent from the field. Jackson led Tech in the first half with eight points, followed by Cameron Swartz with seven and Kara Dunn with six. The Jackets shrugged off a slow start as Belmont kept Tech off the scoreboard until Elijah love hit a jumper at 5:56. Tech slowly increased its deficit and used a strong defensive second quarter to extend its lead. Limited to just nine tries from the field in the second quarter, Belmont was outplayed 18-7 in frame as the Jackets assembled a 9-1 run in the final four minutes to hold the lead at the break. 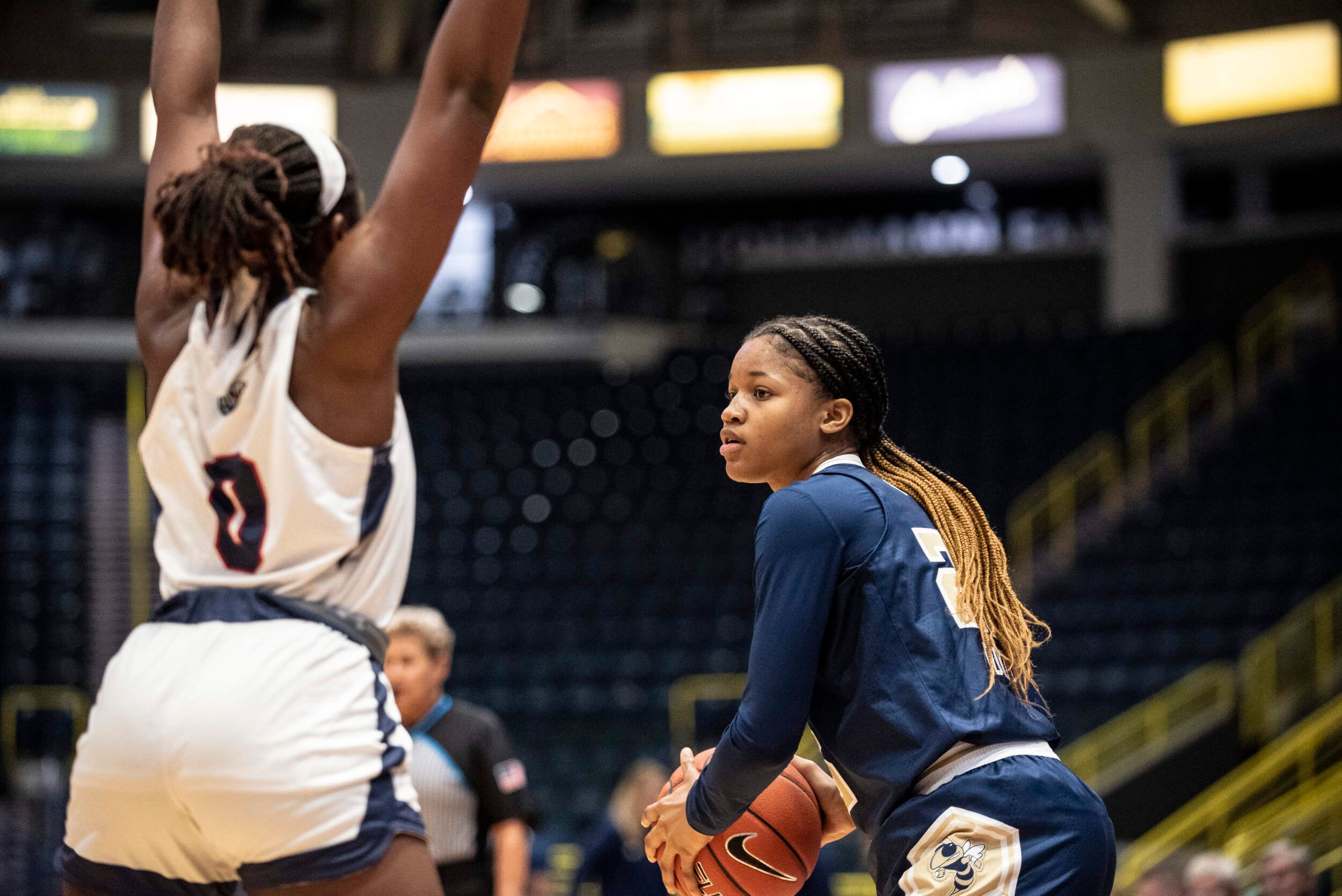 Kara Dunn finished the win over Belmont with eight points, seven rebounds, an assist and a steal. Photo by Kevin Bires

Jackson ended the day with a game-high 24 points, seven rebounds, an assist and a steal. The Montgomery, Ala. native went 7-on-8 from the free throw line to lead Tech’s 18-on-25 effort at the charity strip. Swartz added 12 points, six rebounds and was 5-for-5 on free throws while Dunn added eight points and seven rebounds in the win.

Belmont was held at the free throw line 5-9 and shot 31.3 percent from the field led by Madison Bartley with 22 points. Tech kept Belmont’s top three scorers all in single digits and the Bruins to 20.6 percent (7-34) from three-point range. Tech narrowly won the rebound fight, 49-43, despite Belmont’s second-half effort, 26-21.

Georgia Tech returns to the hardwood on Thursday, December 1 for the 2022 ACC/Big Ten Challenge, traveling against Michigan State. The Yellow Jackets and Spartans tip at 8 p.m. on the Big Ten Network at the Breslin Center.

In a joint effort, Georgia Tech, the Georgia Tech Foundation, Georgia Tech Athletics and the Alexander-Tharpe Fund have joined forces to accelerate scholarship funding for students and athletes with the launch of the Competitive Drive Initiative. The initiative begins with the Accelerate GT Match Program, where every new donation to AT Fund’s Athletic Scholarship Fund made through December 31 will be matched dollar for dollar by the Georgia Tech Foundation up to $2.5 million . Should Accelerate GT reach its fundraising goal of $2.5 million, the gift would result in a $5 million impact to Georgia Tech Athletics. To learn more and contribute online, visit atfund.org/accelerate.